Good evening lizard-lovers,
I hope you enjoyed the last post in which I got a little off-topic of summing up the field season with a tonne of baby pictures...
Anyway, this time I promise to actually write a concluding blog this time.

First off, as I may or may not have mentioned before, we decided to exclusively catch S. undulatus this time. The reasoning behind this was mainly that mark-recapture of the sort that measures natural selection requires one initial capture, and at least two more recaptures following. We already have this completed for H. maculata... May/June 2011, August 2012, and May/June 2012. Because we decided to add the second species, S. undulatus, May/June of this year we decided to focus on them this season (July/August) because we had under a month and needed to increase our sample size... (yes this also means we'll be going back next spring for our last recapture!)

Well, unfortunately, recapture-rates (from lizards marked in the spring of this year) weren't nearly as good as they were for H. maculata.


Overall, of the over-200 lizards we caught, only ~10% showed elastomer marks from the spring. This is surprising since after the summer last year, we had a 60% recapture rate for H. maculata. We can think of two possible reasons behind this low recapture rate. The first is that perhaps the elastomer tags are falling out. Perhaps I am not tagging the lizards deep enough and they are shedding their tags with their skin. We thing this is unlikely because we'd see a number of lizards with some, but not all of their tags remaining- i.e. the ones that were not deep enough. This doesn't seem to be the case... either lizards had tags, or they didn't. We hope that with all the photographs, scans, and gps coordinates we took, we can match up the lizards determine if they really did lose their tags.

Of course, it is also possible that the population size of S. undulatus is much larger than we had anticipated (this is what mark-recapture calculations should tell us)... and this species is far more elusive. Considering what we know about the fence lizards... they do seem to be elusive. They are more arboreal than the lesser-earless lizards, and hide extremely well in vegetation (such that we often have to wait for an hour for the little fellows to re-emerge).

Regardless of the extra patience it required to catch S. undulatus and the lower recapture rate, the field season was a great success with an average of 13 lizards per day. We even got a chance to head over to the Jornata Long Term Ecological Research Site (one of our dark-soils sites) and take a look at some of the species there:


Well with that I will finally sign off for this year. Hopefully soon I will be able to post some results regarding the direction and magnitude of natural selection on the two White Sands lizard species- the lesser-earless lizard (Holbrookia maculata) and the Eastern-fence lizard (Sceloporus undulatus). Is natural selection still acting? What form does it take? Is it similar in both species? What about the population dynamics? Is there a fifty-fifty sex ratio? What is juvenile recruitment? How far do lizards disperse and do both species overlap in habitat use?
So many questions... only one dissertation (for now!)

Thank you everyone for following! Thank you to my great field assistants (Jackie Howells, Isaiah Hoyer, and Michaela Brinkmeyer), and especially the lizards for their reluctant participation in the noosing, prodding, flattening, and injecting that is my project!
Until next time, good night herps and herpetologists of the world!
-S. Des Roches 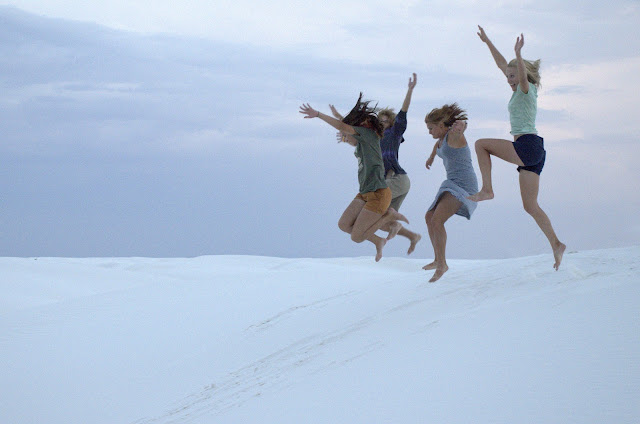 I have a legitimate excuse for not posting during the last field season. I finally broke down and purchased a new camera body. Unfortunately, because I shoot in RAW, and Nikon seems to change this format every few cameras, my old-2008-macbook's version of iPhoto could not seem to process my recent photos. After much chagrin, I found freeware online that allowed me to batch and convert a group of photos from RAW to jpeg all at once! Woohoo!

Anyways, I have been back from the field for nearly a month now and I am eager to show you some of my new sparkling photographs and do a little sum-up of the highlights of this year's field season.

BABIES!
When we came back to the field at the end of July, the desert was a nursery of scaly and feathered young. The barn swallows are always nesting around the White Sands visitor centre- very cute. Very inquisitive, and overwhelmed by instinct, likely to open their mouths in synchrony when you pass your hand in front of their nest.

Isaiah also happened to look down the right bush and see a black-throated sparrow nest just 1.5 feet from the ground!
Enough of the feathered creatures, you say! Where are the tiny cute little lizards we're all waiting to see!? Fortunately, I have some for you. Last year, times were tough- little rain brought fewer delicious insects, larvae, and spiders and thus fewer offspring. As such, we noticed far fewer yearlings/juveniles this spring. This year, however, butterflies fluttered everywhere, it was greener (for a desert), and we saw babies of each of the three White Sands species! 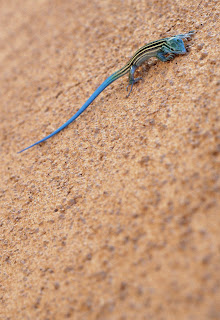 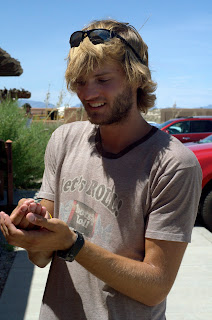 Hatchling A. inornata. This little guy is 'dark' and when we nabbed him outside the visitor centre, the people there scolded us for handling the lizards- until we said we were Herpetologists!

I'm going to sign off for now and continue the sum-up of this last field season with a new blog post. Stay tuned- for later this evening!

Until then!
-S. Des Roches

Well, it certainly has been a while!

Last I blogged about our Outreach day- which of course, was a blast. We finished up the last few weeks of the beginning-of-the-activity-season-field-season-part-one shortly after our kid's outreach days. Overall, we had fairly a fairly successful recapture rate for Holbrookia maculata... which was, funny enough, almost exactly 50%. We finished the field season with 175 successful captures, 87 of which were previously tagged from last year- either in the beginning or end of the activity season in 2011. We captured 145 Sceloporus undulatus and tagged every single one.

We also chanced upon some exciting other finds... which may be considered predators roaming around our interdune sites!


Does this say something about the biology or ecology of this species? Is our study going to be effective at measuring natural selection by mark recapture over two years for S. undulatus? Whether or not we will be able to gauge the strength and direction of selection on this species, is yet to be determined... however, at the very least we can obtain informative population data, discover something about the robustness of mark-recapture methods for measuring natural selection across species, and spend just a few more weeks in the sun chasing after reptiles!

Good afternoon!
Well, it is about time I spoke a bit about our adventures putting on our outreach program last week. On Thursday and Friday we led a "Lizards of the White Sands" day camp for local kids ages seven to fourteen as part of the White Sands Institute (which is an organisation that runs various classes for the public to enjoy the national monument).
This year is our second year running the event so fortunately we had a working schedule:


I. Introduction to White Sands, lizard ecology, and evolution.
II. Pack up with lots of water, sunscreen, and sunglasses to go out to the dunes.


At the end of the game, we had the same number of dark and white lizards - 9 of each.

This process takes many generations (where the lizards have babies like themselves), which is why you don't see white lizards taking over rapidly after only one reproduction event - they increase in proportion gradually; over time there are more and more lizards that match the white gypsum substrate of White Sands, or camouflage, and fewer and fewer that stand out.


IV. Catching the three species and learning about their ecology
What were the lizards doing when you first spotted them? What is the shape and colour of each species? How do you tell a male from a female?

As usual we had a fantastic time with the kids- definitely one of my highlights of the summer. We are certainly fortunate to work in White Sands where we have the opportunity to put on such outreach programs! Thank you to my assistants, Isaiah, Mikki, and Jackie for helping me out this year, to David Bustos and Joan Griggs for doing the logistical work and advertising to get the camp running, and finally to my advisor Bree for letting us take charge and providing the foundation for the program!

Good day for now! Only one catching day left! Stay tuned for a season-recap and some photographic highlights!